This post is the first installment in an ongoing series about finding meaning in computation, particularly when computers interact with our words. Feel free to subscribe, or check back in the coming days for more posts. 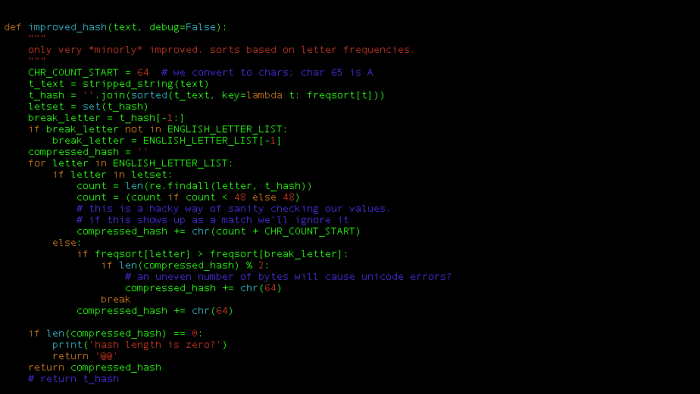 My favourite user on twitter is a cyborg by the name of @ANAGRAMATRON who is part man, mostly machine. At its heart @ANAGRAMATRON  is a piece of software that organizes (through hashing) the stream of tweets posted by all users based on their alphabetical characters to look for anagrams. (Anagrams are words, sentences, or phases that are composed of precisely the same set of letters, but in a different order, like rat/art or dormitory/dirty room.) Whenever it finds two tweets composed of the same letters, it checks to make sure that the tweets are not too similar, and provided that they’re sufficiently different, sends the results to its human programmer to be assessed. If there’s the spark between the two tweets, any form of connection or conversation, juxtaposition or drama — if something interesting happens in the pairing, they are retweeted by @ANAGRAMATRON. The results are often fascinating, finding anagrams that work so well together, it feels as if they were meant to be, brought together by divine power: 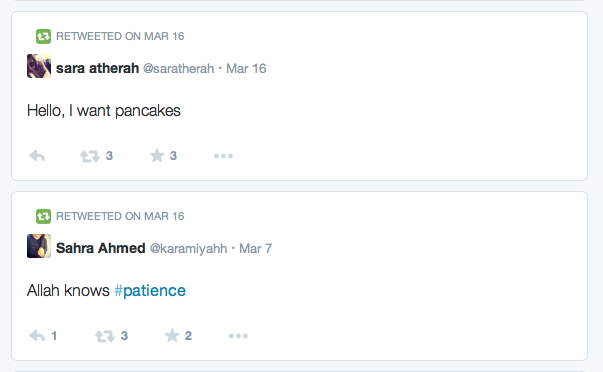 It’s magic, really: somewhere out in the world two people, who don’t know each other, both type the exact same characters in their tweet, only in a different sequence, and not only are they anagrams, the tweets actually mean something to each other. @ANAGRAMATRON often showcases an eerie serendipitous connection between all of us online, two people can tweet about the same experience, but with different words, and yet do it using the exact same set of letters. 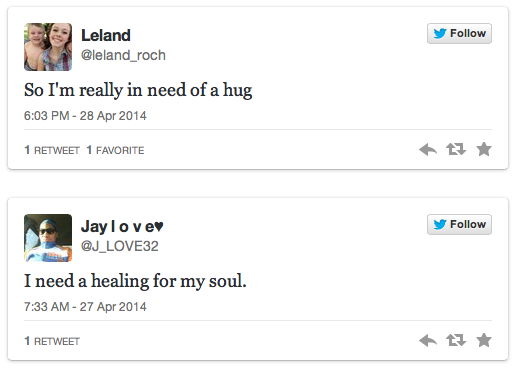 You can check it for yourself. I did, and they’re really anagrams, as surprising as that may seem. For me, scrolling through @ANAGRAMATRON’s twitter feed always evokes a feeling of what are the odds? (I calculated them and, on pen and paper, the odds that a given tweet has an anagrammatic match is less likely than winning the lottery, which, given the success of @ANAGRAMATRON suggests to me that there might be a truth in anagrams beyond just having the same letters.)

No other source of anagrams I know of can compete with @ANAGRAMATRON’s tweets, because unlike most,  @ANAGRAMATRON’s are not forced. They’re accidental. They use colloquial spelling, and there’s authenticity to the tweets because you’re not looking for an excuse to fit the word xertz into your constructed anagram. But not only are they good anagrams, @ANAGRAMATRON also inadvertently captures a snapshot of who we are collectively, because it pulls tweets from every user. You get a sampling of the usernames we call ourselves, the spelling mistakes we make, our punctuation style, and the things that are on our minds from all across the web.

For the highly internet-literate, this can add a whole new dimension to @ANAGRAMATRON. We can tell from how a user spells, how often they post, and what they say, the type of online personality they are. All of this happens at breakneck speed — the internet-literate reader is well-adapted to quick scrolling and scanning, an essential skill when there’s a massive amount of disjointed text to digest. We’re very aware of the web’s cliches and characters, and can filter and categorize the information to find its meaning. Even if no food products are mentioned, we can find the vegan on tumblr.  If a Redditor tips his fedora at you, you know he has a neck-beard and says m’lady. And if I told you that a white girl, wearing a North Face jacket and Uggs, has an Instragram account, you know that there would be a photo of a Starbucks cup, or of open textbooks with the caption 😦  Studying  #coupledwithanoverlylonghashtaglongerthanthecaptionitself and you also know that the same girl, if she likes you, will close a text conversation holding the last letter of the word, byeeeeeeeee.

Moments of these characters, perspectives and discussion are captured here. This anagramatic pairing forms a familiar online drama between two online characters. From just one tweet, we have a good idea who each user is, and the unintentional discussion they have through @ANAGRAMATRON is believable – it’s not hard to imagine that these users could truly interact in this way. Of course, you already know, but it’s easy to forget: these two tweets do all of this within the confines of exactly the same letters (aacddeeeeehhlnooorrstww), which regardless of what they say together, is a feat in itself. 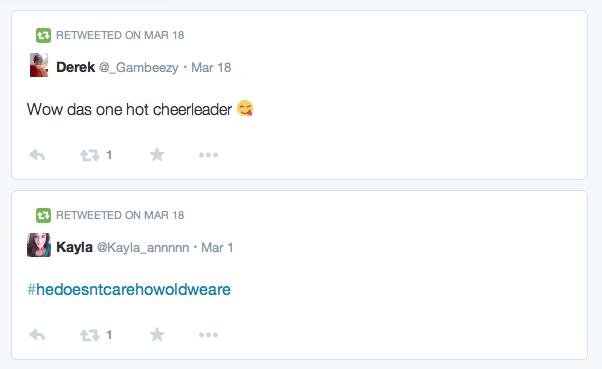 @ANAGRAMATRON is part of an ever growing online community of computer programs who interact with users in the same way a human user would. There are bots on Reddit who reply to any comment linking to a Wikipedia article with text from the webpage itself, keeping all information relevant to the discussion within the thread. There’s a bot on twitter who suggests to any user who says sneak peak that they might actually mean sneak peek, and a bot on Reddit who, before he was banned because users found it amusing to summon him, corrected Ghandi to Gandhi. There are bots rigged to tweet the weather, send out an alert whenever a earthquake hits a part of the world or a child goes missing – all without a human ever having to lift a finger.

We’re most familiar with the devious bots, who email us to let us know that yet another Nigerian Prince has left us a million dollars, who phone us to let us know we’ve won another cruise, or who pop up with their calculation of the number of lonely Russian housewives within 3 miles of your house (which, oddly enough, seems to be about the same number regardless of where I am — maybe they’re following me?). Most bots, however, are invisible. Many are scraping information off of the web, moving from page to page, pulling any email address or phone number they can find and storing them for use later. Some find popular content and repost it somewhere else where they can make ad revenue off of it. For most of the internet, it’s all about hits and clicks, and a lot of those come from impressing Google’s automated search system, making sure that popular search terms lead to your website and not someone else’s. Bots play a flirtatious game, trying to impress one another, searching for something that another one might like.

It’s similar story on the stock exchange, where big companies use automated algorithms to trade. Part of the reason is speed: an algorithm can react to changes in the market faster than any human can, but it’s also about secrecy: when you want to move a large amount of shares, you don’t want others to know that you’re moving that kind of volume, because of the impact that knowledge could have on the market. So, you hide your large trade by having bots make millions of smaller trades and hopefully have it fly under the radar. However, there are also algorithms that are looking to discover these large trends and piece back together what is truly happening. Bots hide the information, bots look for it. Bots on bots on bots.

They’re not just a small part of our world anymore. As of a few years ago, bots make up the majority of web traffic. That’s right, more bandwidth goes to non-humans than humans. Some will visit this very page, looking around for something. (Welcome to therunonsentence.com, bots.) Every moment, they explore and change the landscape of the internet automatically, with no input from us — even if no human touched the internet, it would still change, and build upon itself in the exact opposite way a river erodes the earth. They curate the environment that we inhabit online.

In their quest to impress us, they learn things about us that we couldn’t see on our own.  There’s a movement of poetry called flarf, where the lines of poetry are copied from Google auto-complete search terms, a way of the poet asking Google what do the people want to hear? Sometimes the suggested search terms can be surprising, but they’re not so much wrong as they are enlightening. Google is pretty damn good at finding what we’re looking for, without a doubt better than I’d be. The best bots show us something about ourselves that we couldn’t see, but it did. Even if it makes you feel uneasy (which it shouldn’t) bots are taking over in tasks that you might assume are reserved for humans. Some sports articles, for example, are now written by bots, especially static-laden game summaries, and they’re good enough you wouldn’t know that they’re tranistor-generated by reading them. When something becomes that formulaic, when we understand something so well that we could explain it to a piece of silicon and do just as good of a job, I say let the silicon do it.

Naysayers who fear losing the human heart of writing, that X-factor which only a person could provide, I propose that you have nothing to fear. If you do indeed offer more to your readership than the computer does, you will still find an audience. Let the computer be the benchmark of good writing. If you can’t beat the computer, you shouldn’t waste your, or anyone else’s time. (Do all romance novels, gossip magazines and chart-topping pop songs beat the computer? I’m not convinced they do.)

I’m not suggesting that computers can’t produce good writing (I think they can), nor am I suggesting that computers should take over as the dominant force in the writing world. But, since our strengths and weaknesses complement each other so well, I insist that creative artists embrace computers as worthy collaborators. It’s time for artists to explore computation as a medium, especially when our world is so controlled by it.  If you look around it won’t take long to find something that is determined by an algorithm, yet you’ll have a hard time finding art that is.

Bots like @ANAGRAMATRON help to fill that gap, where man and machine work together to both find and create something amazing, and in my opinion this foreshadows a bright future for writing. But what do I know. After all, an anagram for ANAGRAMATRON is A ARROGANT MAN. (But that’s just what a piece of software I wrote told me, it’s up for you to decide what it means.)

You might want to check out The Best of @ANAGRAMATRON where I’ve collected my favourite tweets by the bot, and stay tuned for more posts in this series on computation.